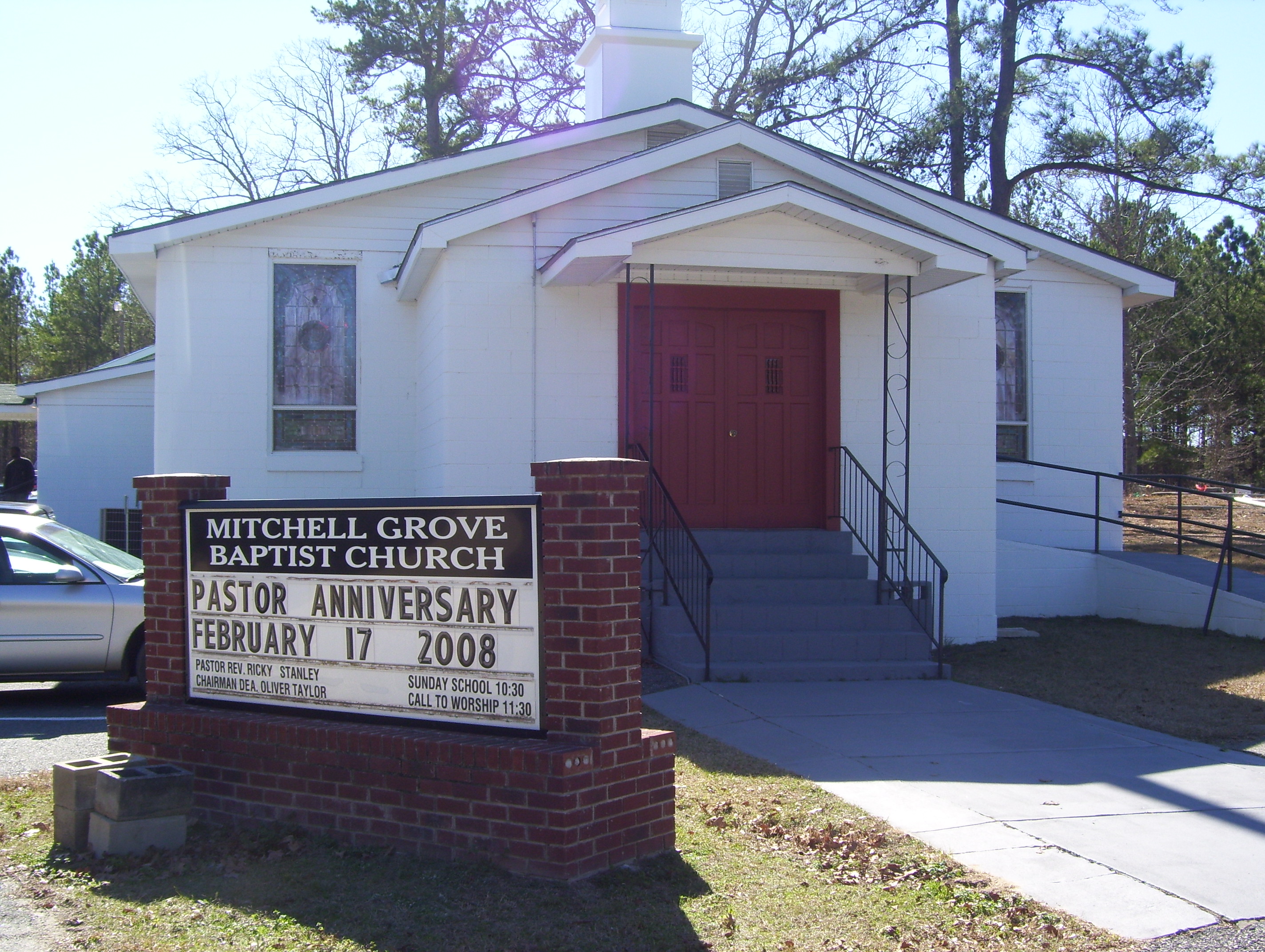 Mitchell Grove Baptist Church was originally founded in the year of 1904 by Brother Charlie Mitchell and Brother Lewis Mitchell. The meeting took place in a Brush Harbor.

The first pastor was Rev. Robert Takes, Charlie Mitchell was chairman, Lewis Mitchell and Roger Burton were deacons. The Brush Harbor was destroyed by fire, and another church structure was built.

Mitchell Grove Baptist Church was used as a school for twenty-five years, from 1918 until 1943. This community was known as the Mitchell Grove Community. There were many classrooms in the church and the church had more than one teachers. The teachers were Ms. Vivian Reese, Ms. Annie Darrisaw and Ms. Mary Washington. A cemetery was also located in the church yard. There was also a big bell that sat in the church yard. The bell would be rung for school and to alert everyone that a funeral was coming. The school would be interrupted by a funeral from time to time. In 1943, the school moved into the city limits of Wrightsville, GA. In 1955, all of the students of the Mitchell Baptist Church School were relocated to Doc Kemp School.

Rev. A.J. Johnson was the twelfth pastor; Deacons who served at that time were Thomas Alfred Pooler and Robert William Scott. Rev. H. B. Ringwood was the thirteenth pastor. Ordained as deacons were Will Spanks, Robert L. Pooler, John W. Pooler, Sr., Jessie B. Pooler, Thomas W. Pooler, Fred Wright, Willie B. Denson, and Alfred Taylor.   In 1950 God called Deacon Will Spanks from labor to reward and in 1951, God called Deacon Fred Wright from labor to reward.

In 1953, Deacon Robert L. Pooler preached his trial sermon and was licensed the same year. In 1955, God called Deacon Thomas Clover and Deacon John Curtis Stanley from labor to reward. In 1955, on the first Sunday in January, Rev. R. L. Pooler was ordained and began his ministry. In 1955, Deacon T. W. Pooler was licensed for ministry, and in May 1956, he was ordained and began his ministry. Fourteenth pastor was Rev. Charles Brown, Sr., who was called in November 1957.  In the 1960's the old church was torn down.

The members conducted service in a house a few blocks up the road east of here. On September 2, 1962, we moved into our new church. On June 29, 1964, Deacon Robert William Scott was called from labor to reward.   On July 4, 1976 four deacons were ordained Bro. Earnest Scott, Bro. Jerry Pooler, Bro. John W. Pooler, Jr., and Bro. Oliver Taylor.

Rev. Larry Harvey preached here at Mitchell Grove Baptist Church on Homecoming Day on September 1, 1985. He was called as pastor the same year. He became the fifteenth pastor on October 6, 1985. On June 19, 1988, Bro. Verlis W. Pooler and Bro. Leroy Pooler were ordained as Deacons. Bro. Curtis Green was ordained as deacon in August 1989.

Mitchell Grove Baptist Church presented the Installation Service for Rev. Ricky Bernard Stanley, Sunday, February 18, 2007. He was called as pastor, and he became the sixteenth pastor. Under the leadership of Pastor Stanley the following ministries were formed: In December 2007 the Mitchell Grove Male Choir was formed, Bro. Johnny May serves as Choir President, Sis Anita Hill served as Keyboardist, Bro. Rico Blackshear served as lead guitarist, Bro. Jesse Robinson, Sr. Serves as Bass Guitarist, Bro Jesse Robinson, Jr., Serves as Drummer. The Singles Ministry, Minister Maxine Garcia serves as Advisor. The Youth Advisory Ministry was formed and the following ministries were added; Christ-4-Life Praise Dance Ministry, Unlimited Praise Dance Ministry and the Drama Ministry.  Also the Video Ministry was introduced. On May 24, 2009 Deacon Ted Pooler was ordained as Deacon. On May 17, 2010, Deacon Leroy Pooler was laid to rest. May 2010 the Praise Ensemble Choir Ministry was formed. In April 2011 Bro. Randy Cooper was hired as the full time Minister of Music.

Past & Present Church Mothers who served are:

Missionary Department: Past and Present

As we honor the founders and great members past and present lets keep in mind Jesus Christ is the ROCK We Continue to Stand On!!!!